This is such an insight into politics...I forgive this woman. So sincere.

What do you think about DOMA? I think it is discriminatory (in section 3) and I stand with the President in choosing not to defend it.
Here is more info if you need it: http://www.glaad.org/resources/doma
Posted by Emily at 11:47 AM No comments:

The Presidents calls out Fox News and Rush

I love it when my President is brave enough to call out the scum of the media, Fox News and tell it like it is. Awesome!


"One of the biggest factors is going to be how the media shapes debates. If a Republican member of Congress is not punished on Fox News or by Rush Limbaugh for working with a Democrat on a bill of common interest, then you’ll see more of them doing it.
I think John Boehner genuinely wanted to get a deal done, but it was hard to do in part because his caucus is more conservative probably than most Republican leaders are, and partly because he is vulnerable to attack for compromising Republican principles and working with Obama.
The same dynamic happens on the Democratic side. I think the difference is just that the more left-leaning media outlets recognize that compromise is not a dirty word. And I think at least leaders like myself—and I include Harry Reid and Nancy Pelosi in this—are willing to buck the more absolutist-wing elements in our party to try to get stuff done."


Truer words have never been spoken. I completely agree that Boehner was trying to do his job and compromise...but bc of the pressure from hot heads like those seen on Fox News and silly radio shows, the right wingers were fired up and not willing to work it out.  Furthermore, the Dems are guilty of pressuring things...but it is within reason...it never goes as far as Fox or Rush or Beck...all the dirty words that feel filthy leaving my lips. Those people care more about profit than progress; more about ratings than reason. If anyone is called unpatriotic it should be those people....

Thanks goes to this article where I read this quote from our President: http://www.politicususa.com/obama-calls-rush-limbaugh-fox-news-poisoning-national-discourse.html   HERE
Posted by Emily at 1:15 PM No comments:

Repubs are at it again...war on women

I am an advocate for protecting evidence to prove someone guilty of something as serious and traumatic as rape...but this is UNREAL! Sure enough....it is happening...not in another country...but yes...the U.S. of A!
CLICK HERE TO BE SHOCKED
Posted by Emily at 9:34 AM No comments: 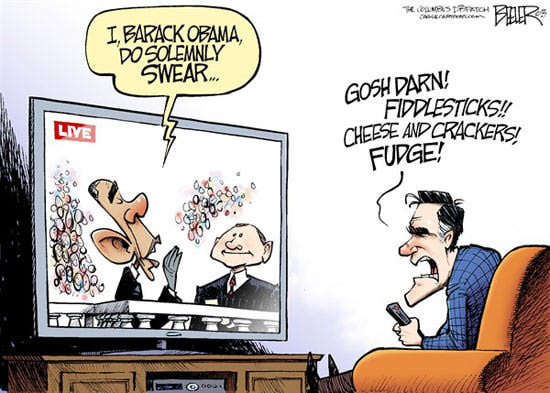 I LOVED every second I saw of the Inauguration! It was such a day of celebration. I loved the music, the poems, the candid moments and of course the President's speech was a highlight! I found it highly appropriate that Mr. President celebrated his beginning of his second term (after being the first black President to being the first black President re-elected for a 2nd term), on Martin Luther King Jr Day! Even if you disagree with the politics of the President...you have to (if you are reasonable) agree that this family is adorable and that they are good people. And I could not help but feel connected to American history...and American tradition as I watched the proceedings throughout the day...live. It was awesome! If you want to see some funny moments including a look Michelle gave Boehner at the luncheon and Al Roker's freak out as they (the President, First lady and VP and Jill Biden) walked 1/2 mile of the parade route click here. 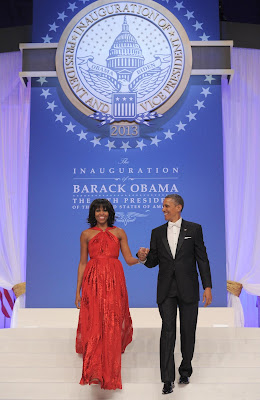 Quote of the day:

"Let us learn respect for others if we are to realize the abundant life. Man, by nature, is tempted to seek only his glory and not the glory of his neighbor or the glory of his God. None of us lives alone—in our city, our nation, or our world. There is no dividing line between our prosperity and our neighbor’s poverty."

What my church believes about me being a Democrat?

Scripture of the day:

Scriptures to have in our hearts when we vote!

"And the Lord called his people Zion, because they were of one heart and one mind, and dwelt in righteousness; and there was no poor among them." — Moses 7:18

"Pure religion and undefiled before God and the Father is this, To visit the fatherless and widows in their affliction." — James 1:27

"We do not believe it just to mingle religious influence with civil government, whereby one religious society is fostered and another proscribed in its spiritual privileges, and the individual rights of its members, as citizens, denied." — D&C 134:9

"And now, because of the steadiness of the church they began to be exceedingly rich, having abundance of all things whatsoever they stood in need—an abundance of flocks and herds, and fatlings of every kind, and also abundance of grain, and of gold, and of silver, and of precious things, and abundance of silk and fine-twined linen, and all manner of good homely cloth. And thus, in their prosperous circumstances, they did not send away any who were naked, or that were hungry, or that were athirst, or that were sick, or that had not been nourished; and they did not set their hearts upon riches; therefore they were liberal to all, both old and young, both bond and free, both male and female, whether out of the church or in the church, having no respect to persons as to those who stood in need." —Alma 1:29-30

13 And because of this their great wickedness, and their aboastings in their own strength, they were left in their own strength; therefore they did not prosper, but were afflicted and smitten, and driven before the Lamanites, until they had lost possession of almost all their lands.